The Anti-Slavery Movement and the Haitian Revolution 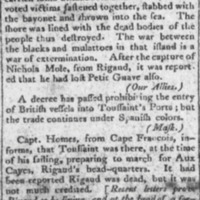 The Haitian Revolution is a largely unknown event for most Americans. Most popular histories fail to cover it and even fewer address its impacts with any significant depth. Despite this absence, the revolution had a major impact on early American society and their thoughts on race and slavery.

Fortunately, the absence of the Haitian revolution from mainstream narratives of American history has been observed by many Historians. A number of scholars such as Alfred Hunt and Tim Mathewson have pointed out that the Haitian revolution influenced early American law, culture, and foreign policy. Haitian scholars have done excellent work documenting the impact that the revolution had on southern America and the American political class. However, little work has been done examining the Haitian Revolution’s impact on the early Anti-Slavery movement.

For the south, the impact of the Haitian Revolution is easy to see. The Haitian Revolution was a bloody reminder that slavery was an inherently dangerous and unstable institution. In response to the revolution, pro-slavery advocates across the south strengthened old slavery laws, created new laws protecting slavery and created new justifications for maintaining slavery based on white supremacy and fear of genocidal racial conflict. The political class was similarly impacted. U.S. leaders such as George Washington and Thomas Jefferson continued to promote and defend slavery in the Atlantic. Even John Adams, who was morally opposed to the institution of slavery, was only interested in the revolution because it fit his Anti-French policies and America’s economic interests.

However, the impact of the revolution on the early Anti-slavers is much less transparent. Many scholars who have attempted to explain the revolution’s impact on anti-slavery often begin from the 1820s, nearly 30 years after the revolution began and 20 years after it ended. Scholars that do examine the revolution's impact earlier have mixed views about its effects. Mathewson argues that the revolution placed the antislavery movement on the defensive, as it now faced criticisms from pro-slavers that their movement incited violence. Hunt argues that the Haitian Revolution barely interested most Northern Americans, who mostly accepted white supremacy and believed they had nothing to learn from Haiti’s example. Neither of these accounts sufficiently compares the different reactions within the anti-slavery movement, why the movement generally failed to take the revolution seriously, and how these may have impacted the abolition movement in later years.