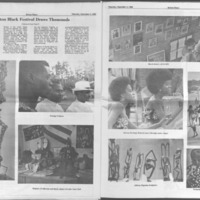 Reston Black Focus was a social organization designed to help black people acclimate themselves to Reston Virginia post the civil rights movements of the 1960’s. They have served a critical role in Northern Virginia promoting Black Culture and encouraging the of the participation of African Americans in their local community as a form of social integration. Reston Black Focused was created to fill the need created by the Reston African American community as they saw themselves integrated into the “New Town” that was Reston Virginia. With Racial integration being a relatively new development Reston Black Focused tried to concentrate its effort in the fields of education, Black culture, civic participation and availability of employment for Black Reston residents. Reston Black Focus would do a lot of social outreach via newspapers and periodicals which would include the Washington Times, Reston Tribune, Reston Times, and the Globe Periodical.

The organization itself would have a positive effect on Reston and its African American residents. Reston Black Focus would go on to sponsor the Reston Black culture festival, which would portray African American art, music, literature, and culture in a general lens. The Festival would also go on to help raise scholarship funds for Black youths in the community and invite guest speakers like Reverent Jesse Jackson, who was a notable Civil Rights activist that marched with Martin Luther King. The positive role that Reston Black Focus played on the community can be seen in the large number of attendees to the Black Culture Festival many of which were white and in the generally positive views that local media gave to the organization. Overall Reston Black Focus wanted to integrate the Reston African American Community to the New Town, while trying to avoid a return to previous norms of racial and class segregation and promoting African American Culture.