The Portrayal of Native Americans in the Jamestown Exposition. 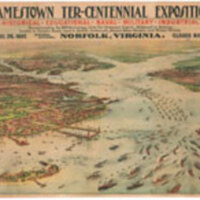 The Jamestown Ter-Centennial Exposition was a multi-day festival that celebrated the 300th anniversary of the founding of Jamestown.

The Jamestown Exposition came about when several Virginia government officials and community leaders as well as the Association for the Preservation of Virginia Antiquities. This conglomerate in the beginning of 1907 went to the General Assembly of the State of Virginia requesting that the Assembly authorize the celebration and for it to be held in Richmond. The group also asked for a sum of money to aid the exposition, there was not opposition to the celebration, but the legislators were not united in the location of the festival. On February 02, 1907, the General Assembly passed a bill that allowed for the Governor of Virginia to invite several cities and regions of the Commonwealth to put claims on the privilege of holding the festival. Several Norfolk citizens as well as the local newspaper campaigned for the festival to be held in Norfolk, this campaign was a success and the festival would be held at Sewell’s Point in Norfolk, Virginia.

This festival in the end was seen as a financial failure with revenue from the days long festival never reaching the cost. The celebration itself has several attractions from many states and historic events from the San Francisco earthquake to the Negro building which displayed the progress of African Americans. But the most well-known event was the dramatized rescue of Captain john Smith by Pocahontas. Native Americans specifically the Powhattan were present at the exposition but not to the degree that the Powhattan had hoped for. They were shown in poorly represented images depicting generic “Indians” which were very common in the festival. Native Americans in many images were generic male Indians wearing feather headdresses and animal skins.

The Powhatan were shown as a form of entertainment for the masses at the Exposition, there were several instances of Powhatan performers that were talked to by white passersby in a mocking way using their native language. The attractions that brought the most attention or had the most positive reviews were the attractions with Native Americans and other ethnicities. This was because of that sense of “exoticism” of looking at a “savage” doing what they would do in their home would garner attention from many who have not seen something like a Native American.