"Let our opinions vary as they will": John Randolph Jr and Dissent 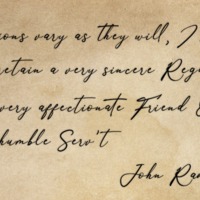 Studies of loyalist voices in the American Revolution range far and wide, from the loyalist diaspora across the globe, individual fishing and farming communities in a geographic region, and the many races and cultures of loyalists in the British West Indies. While we increasingly hear different groups of loyalist voices, a micro-history can provide an effective way to understand why well-intentioned people chose to remain loyal.

John Randolph, swimming against the rising tide of American rebellion that his son Edmund Randolph, his brother Peyton Randolph, and his cousin Thomas Jefferson, were embracing, followed the loyalist path that eventually forced him to emigrate to London. However, little evidence exists of how this man, so well-connected to rebels, came to his life-altering decision. Uncovering Randolph's loyalist life and legacy requires understanding how colonists in the late eighteenth century were practicing dissent.

Research into his own writings shows that Randolph was devoted, literally until his death, to the colony of Virginia and what it was and could become. Randolph's dichotomy of loyalty to Great Britain and life-long dedication to Virginia, the land of his birth, is worth exploring. Other reasons to uncover Randolph’s voice include understanding his consistently civil dissent in a turbulent, often violent conversation, and his unique arguments and reasoning for loyalty. These arguments went beyond the thinking of the loyal masses and showed his continuing conviction of the need for security in the eventual independence of the colonies.

This project explores a unique and passionate voice advocating on behalf of the colonies, while placing that voice within the dissenting culture in which it was heard or rejected. This project also acknowledges that dissenting voices that are 250 years old can inform current challenges of navigating civil dissent today.