LEADERSHIP IN THE RIOTS 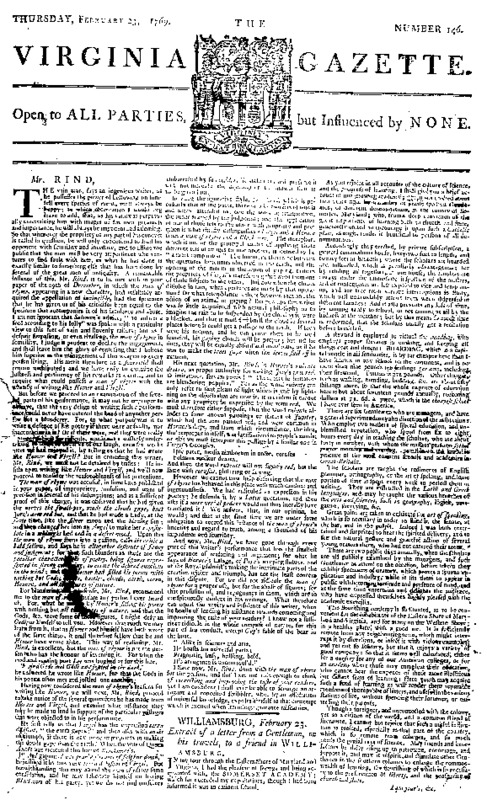 The first page of Rind's February 23rd, 1769 paper. Joseph Calvert's response and critque of Thomas Burke's “On the Recovery of some Ladies in Norfolk from the Smallpox. Addressed to Mrs. Aitcheson” was published on the front page.

While not the main focus of the riots or the other inoculation conflicts, the religuios and community leaders within the different movements influenced those around them. Cotton Mather is a great example of this. As mentioned, Mather claimed that those against inoculation were possessed by the Devil. This, along with other things he had said, had an impact on the people of Boston. William Douglass, also from Boston, is another good example of this. He was very adamant on leadership within the local medical community, and this impacted his public persona.1 Kilpatrick and Dale were both the leaders in the Charleston inoculation conflict in 1738.2

Norfolk was different. There were multiple personalities on the pro-inoculation side who all played important roles. However, the anti-inoculationists had one clear leader: Joseph Calvert. As mentioned, Calvert was a self-proclaimed patriot who was actively involved in both riots. While there are no clear records on who led the 1769 riot, Calvert was labeled as the leader of the 1768 mob. He also instigated conflicts with Thomas Burke both in the Virginia Gazette and in person. When James Parker, in his May 6th, 1769 letter to Charles Steuart, discussed how he was not worried about the court at that time, he called out Calvert when mentioning the anti-inoculationists. Calvert’s actions during this period could be seen as being critical in cementing the ideas of the anti-inoculation movement in Norfolk. Not only did the man “rally the troops” and form the first riot and attack pro-inoculationists without mentioning the uncertainties of inoculation, he was, and is still, seen as the representative of the anti-inoculationist movement.3

← A CONSIDERATION OF RELIGION, TRADITION, AND THE ETHICS OF THE MEDICAL PRACTICE
JAMES PARKER AND THE SCOTTISH STRUGGLE →
LEADERSHIP IN THE RIOTS