THE INVOLVEMENT OF NEWSPAPERS IN THE INOCULATION CONTROVERSY 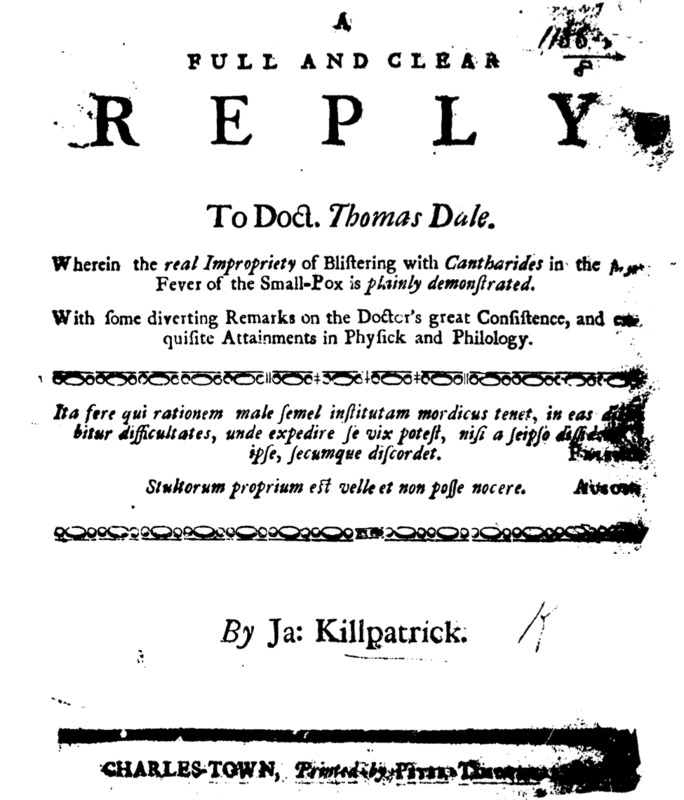 A pamphlet written by James Kilpatrick in Charleston, SC in 1739. Within it, he describes the benefits of inoculation, as seen in Britain. 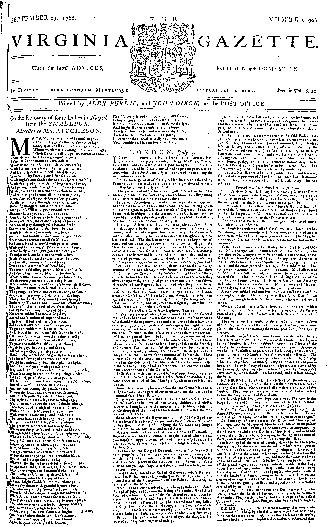 The first page of Purdie and Dixon's September 29th, 1768 issue. This contain Thomas Burke's “On the Recovery of some Ladies in Norfolk from the Smallpox. Addressed to Mrs. Aitcheson".

Print in Boston and Charleston

Newspapers were one of the major sources of media for colonists – it catered to a literary audience and provided many with a perspective that, usually, aligned with their own. In all three colonies – Boston, Charleston, and Norfolk – there were articles published relating to the inoculation controversies during smallpox outbreaks. A fascinating trend occurred in both Boston and Norfolk – two major newspapers in the cities published information for either side of the inoculation argument, but not both. Charleston, in both 1738 and 1760, only saw the use of the South Carolina Gazette1. However, Charleston in 1738 is of note because unlike Norfolk and Boston, the controversy saw itself leaking into pamphlets. James Kilpatrick, a proponent of inoculation, argued with Doctor Thomas Dale about the efficacy of inoculation both in person and in print. Of note about the argument were the pamphlets created by both men. The only surviving pamphlet was James Kilpatrick’s A Full and Clear Reply to Doct. Thomas Dale published in 17391,2.

Boston saw the splitting of opinion about inoculation reaching the newspapers – the Boston News-Letter contained advertisements and articles from the pro-inoculationists, and the New England Courant was what anti-inoculationists published their articles in. It is interesting to note that, as mentioned, individuals like Cotton Mather and Zabdiel Boylston published advertisements for inoculation in the Boston News-Letter (an example was from June 16th, 1721), something that wasn’t done by Dr. John Dalgleish in Norfolk3.

In Virginia during the period of 1768 – 1770, there were two versions of the Virginia Gazette circulating: Rind’s and Purdie and Dixon’s. Like in Boston, each paper showed support for one side of the inoculation argument – anti-inoculationists tended to publish articles in Rind’s Gazette, and pro-inoculationists published in Purdie and Dixon’s4,5. There are two major examples of this trend, however note that they are not the only times the papers supported a specific side.

Another great example of the divide between the gazettes is Thomas Burke’s poem, “On the Recovery of some Ladies in Norfolk from the Smallpox. Addressed to Mrs. Aitcheson,” which was published in Purdie and Dixon’s Gazette on September 29th, 1768. In this poem, Burke, while trying to call upon poets like Homer and Virgil, argues to Mrs. Aitcheson, the wife of William Aitcheson, who was James Parker’s business partner, to inoculate and discusses the riot that occurred on June 25th,1768. In this poem, Burke mentions the wives of Parker and Aitcheson, along with Dalgleish, and Campbell by name, and praises them in some shape or form8:

“While PARKER, kind and tender as the dove,

Her soul all harmony and social love;

Dear in each intercourse of social life,

The much lov’d sister, parent, friend, and wife.”

“The young, the beauteous ATICHESON, to fame?”

“In form thy DALGLEISH every couch attend,

And to each pulse thy kind assistance lend.”

They gorgeous tenderness and manly fire

Whom not the pistol’s levell’d tube could awe,

Though held by hands restain’d by right nor law;”

In his poem, Burke also criticizes the mob for aiming their guns at women and children – calling them “warlike blades”8. While he didn’t put himself down as the author of this poem, Joseph Calvert, a self-proclaimed patriot and anti-inoculationist, published an essay in Rind’s Gazette on February 23rd, 1769 that criticizes Burke’s poetic style, but not necessarily the topic of the poem. While he never states that he knows that Burke was the author of the poem, he calls the author “The Man of Rhyme” and labels him as vain. Calvert, by April 1769, publically called out Burke as the author of this poem and again attacks his character and not the topic of inoculation5.

← INTRODUCTION – THE 1768 – 1769 NORFOLK ANTI-INOCULATION RIOTS AND FOLLOWING COURT CASES
A CONSIDERATION OF RELIGION, TRADITION, AND THE ETHICS OF THE MEDICAL PRACTICE →
THE INVOLVEMENT OF NEWSPAPERS IN THE INOCULATION CONTROVERSY