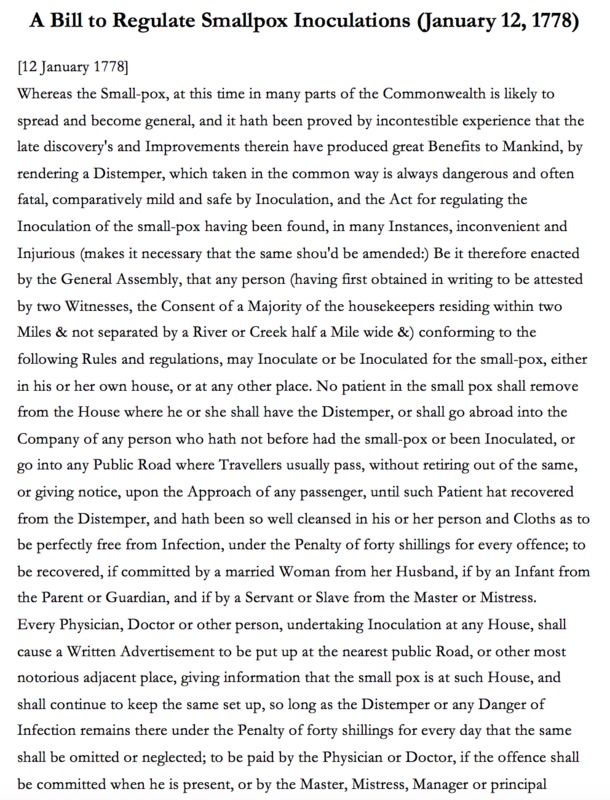 This bill drafted by George Mason countered a 1770 bill banning inoculations within Virginia.

Thompson Mason was the younger brother of George Mason IV. Thompson, with funding from his older brother, studied law in England. While there, he was noted as feeling a sense of alienation from the British, strengthening is shared identity with the Americans. While not as well-known as his older brother, Thompson still played a pivotal role in Colonial America, and some argue that Thomas Jefferson’s A Summary View of the Rights of British America may have been influenced by Thompson's work.1

In the context of Norfolk, Thompson played a role in the courts, not in the riots. The first mentioning of Thompson in Norfolk, according to my readings of the Steuart Papers, was in James Parker’s May 6th, 1769 letter to Steuart:

“...shall be always glad to hear that the gents of N[Norfolk] who have been injured do not depart from Thos[Thompson] Mason then with which they have...”2

In the 1770 case brought against the 1769 mob by James Parker, Thompson represented the mob. There is only one letter that places him at this court case. He has been quoted as saying:

“What my friends, were the good people of Virginia in the days of the Stamp Act, but a mob? Mobs are justifiable, useful, necessary, and commendable.”3,4

“...thirty or forty beggars had more influence in the lobby of the House of Commons towards preventing the excise [sic] Acts then all the power of Sir Robert Walpole.”5

The court case, using Thompson’s quote as evidence, is a key showing of the patriotism of the mob bordering on prejudice against the Scots and the Crown. Thompson, like others on the anti-inoculation side, didn’t try to argue against inoculation, but instead justified the act of mobbing. Using Mason to strengthen the claim of prejudice against the Crown is valid when one considers his past – he had spent time over in London, and this had fueled his patriotic – or anti-Crown, depending on your perspective – mindset1.

George Mason wasn’t directly involved in the riots, the court cases that followed, or in drafting the 1770 bill. However, George was involved in drafting a 1778 bill, A Bill to Regulate Smallpox Inoculations, January 12th, 1778. This bill countered the 1770 bill, legalizing inoculations against smallpox. It also stated that any doctor or physician who was inoculating patients had to place an advertisement outside the house where the patients were staying to let healthy individuals know to not come into the house. Those who used inoculation to spread smallpox had to pay a fine of five-hundred pounds. This bill also repealed the 1770 bill that banned inoculation in Virginia.6 George Mason himself, in a letter to George Wythe in 1777, mentioned that he had been inoculated against smallpox and had just recovered.7