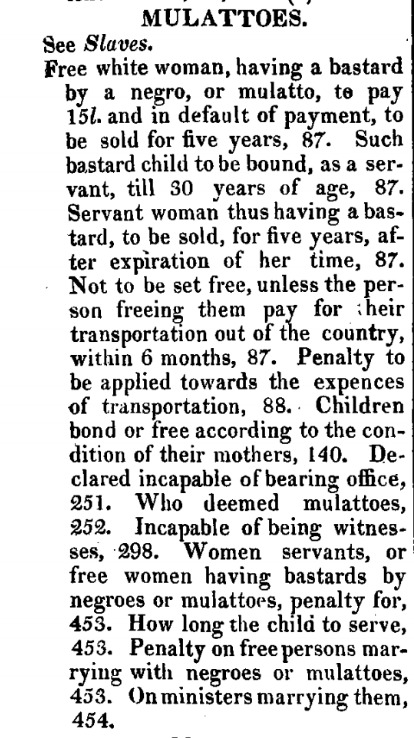 This is a legal document portraying the specific categories for which one could be punished at the time.

What sparks the conversation about injustice in America is the topic of the laws that were in place in the late 17th and 18th centuries. Most of the conversation surrounds the laws specifically involving bastardy and those punishments; however, there are several other laws that one must look into to accurately reflect on the reasoning at the time. Two types of laws that I looked at included anti-miscegenation laws and fornication laws. Many laws were based on morality; however, they reveal more than just the religious values of the time. They also reveal societal thought on race and social status. As portrayed in the legal document above, laws between the 15th and 17th centuries were very specific to race and gender. Each law was specific to a different demographic. These groups were: male vs. female, white vs. mulatto vs. black, and slave/servant vs. free. Each group could face a different punishment, and, just like today, intersectionality also affected everyone whether for the better or worse. This greatly impacts the consequences that one would receive, and warps the justice system in favor of the white male.