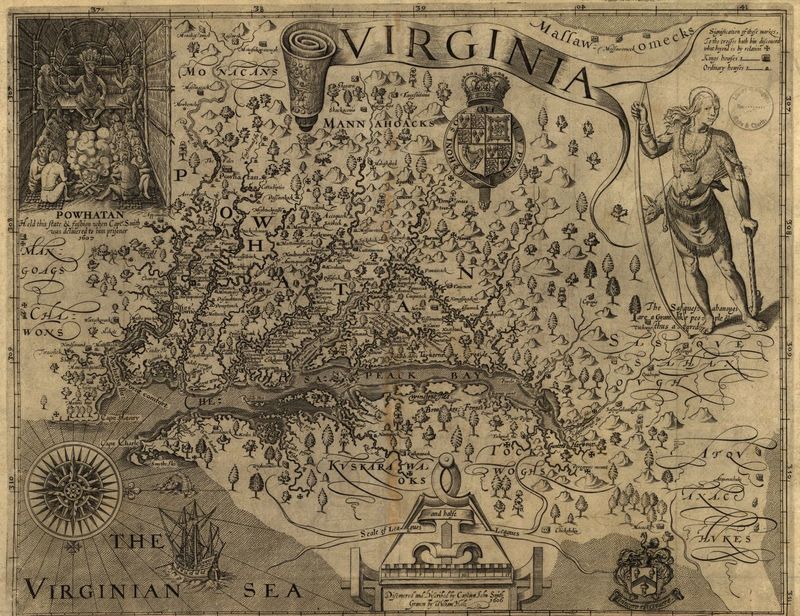 Before the Mason family arrived in Virginia, there was a diverse population of Native Americans in and around the state. These were the tribes the Mason family would interract with most, along with others to the north and west.

When John Smith arrived in the modern-day Fairfax area in 1606, he recorded the town of Tauxenent on the Occoquan river[1], which belonged to the people the English called the Doeg (also known as the Dogue, Taux or Moyumpse). Originally a hunting and gathering people, the Doeg became aware of farming practices long before they adopted them into their own communities, but by 800 A.D. they were regularly growing crops for food. Using slash and burn techniques, and without fertilizer or erosion control, they moved towns every ten years or so. They most likely migrated from the Potomac Valley to modern-day Fairfax around 1300 A.D., to occupy both sides of the Potomac from modern day Alexandria to Prince William County and as far west and Centreville.[2]

A stubborn and independent people, the Doeg were one of the few tribes in Virginia to remain independent from the Powhatan tributaries. By 1607, the mamanatowick, or paramount chief, Powhatan ruled an area of about 6,000 square miles encompassing at least fourteen thousand Algonquin speakers[3] which included both deeply loyal and fringe tribes. The main six chiefdoms were the Powhatan, Arrohateck, Appamattuck, Pamunkey, Mattaponi, and Chiskiack. These tribes were bound together by defensive interests against Sioux, Iroquois, and later, European threats.

While there are many cultural, linguistic and structural variations among the Powhatan tribes, most hunted, gathered, and fished but also had strong agricultural systems. Core crops like maize, beans and squash were normally farmed by women, who passed down inheritance titles and had a higher status in society than English women. Like the Doeg, their towns would never stay in one place but move “amoeba-like”[4] as they left dwellings behind with fallow land. The English often took advantage of this “abandonment”, failing to comprehend the Powhatan understanding of land.[5]

While the Powhatan were the main power in Virginia, both they and the early colonists were greatly affected by tribes in Maryland and Pennsylvania, including the Piscataway, Susquehanna and Iroquois. In Ohio, the Mason family also came into contact with the Shawnee, Delaware and others. These tribes were strongly influenced by and strongly influenced early settlers.

George Mason I: Harassment and Rebellion →
Before Colonization