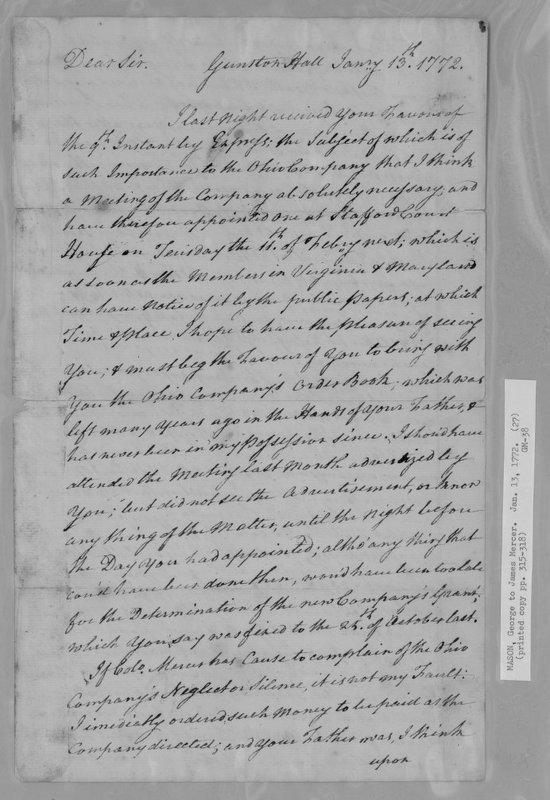 George Mason writes to John Mercer in 1772, expressing his concern over losing Ohio Company land in the west. 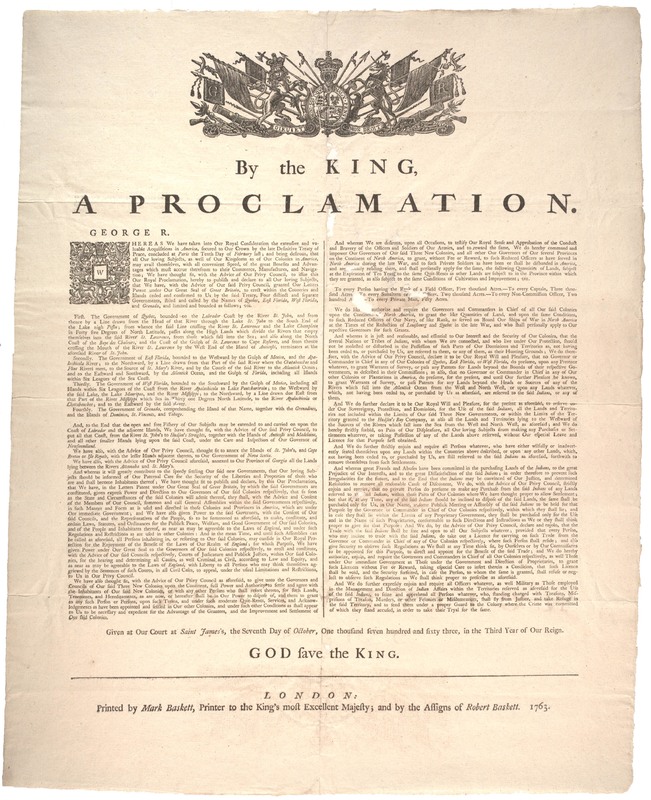 While many factors pushed the founding fathers towards independence, one that hit particularly close to George Mason IV was the British restriction of western land. Since 1749, Mason had been involved in the Ohio Company whose aim was the occupation of the trans-Ohio country. Two hundred thousand acres were given to the governor of Virginia by the request of the company. Very soon, issues arose with the French, who also had a claim to the land, and the French and Indian war erupted.[1]

The war ended in 1763, quickly followed by the Proclamation of 1763 in which King George III dissolved all land grants west of a line drawn down the Appalachian Mountains, including that which belonged to George Mason and the Ohio Company. The British drew this line out of fear of another costly war.[2] With the Shawnee in the lead, the Ohioan Indians had formed a coalition against the Virginians, creating a formidable force that frightened the British. George Mason set out to test if this abolition of land grants would be enforced. In 1774, Mason petitioned the Executive Council of Virginia to grant him fifty thousand acres, claiming that this land was a right that the government could not deny him. The Council turned down his request, pointing to the Proclamation of 1763.[3] This denial of what Mason felt was his inalienable right was one of the factors that pushed him to join the American Revolution. In this conflict, American Indians were not simply victims of European colonialism but powerful influencers in Anglo decisions, even the decision to rebel against British rule.[4]

While we remember George Mason for pioneering the Virginia Bill of Rights, and protecting the rights of future generations, he paradoxically extended the systematic denial of Native rights that had been present in British rule by excluding Natives in his famous document. In colonialist law, according to the House of Burgesses, Indian servants were “deemed and taken to be persons incapable in law.[5] They were often differentiated from white Christians, along with other minorities in law, punishment, and other legal actions. Failing to address these “Black Codes,” the U.S. Constitution and Bill of Rights continued the exclusion and suppression of minorities including American Indians. David Bearinger wrestles with this in The Virginia Indian Heritage Trail as he examines the 2007 celebration of Virginia’s 400th anniversary. While we remember many famous Virginians like Mason for their contributions to a state championing freedom, we forget the complexity of this history, and what it has meant for minorities like African Americans and American Indians. We forget the histories of Virginia Indians which are “significant in their own right” and “essential, irreplaceable tributaries of the larger story of Virginia.”[6]