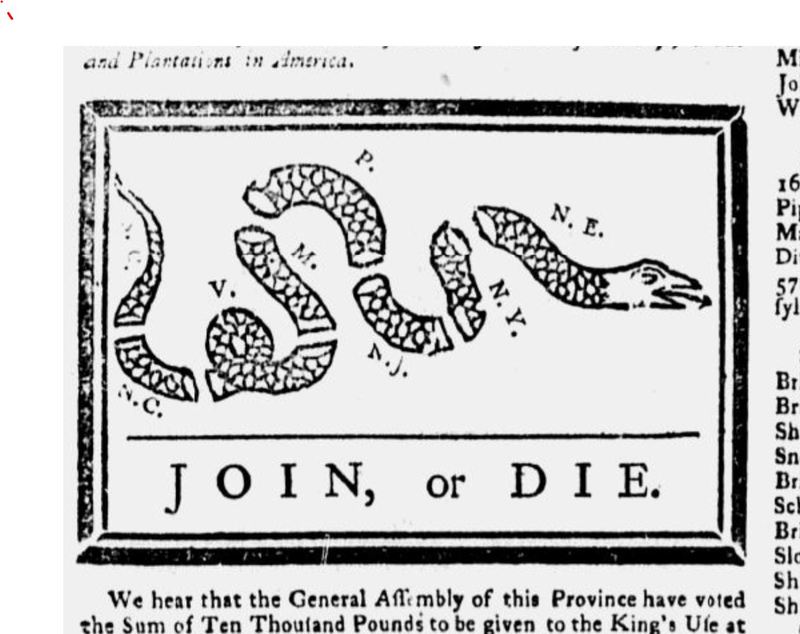 Engraving attributed to Benjamin Franklin, from his Pennsylvania Gazette. Re-used during the American Revolution to influence people to unite the colonies against the British.

One of the most recognizable examples of negative dissent is the "Join or Die" image, which was reconsituted for the revolutionary era as "Unite or Die," showing the snake broken up into "colonial" segments, with the message that if colonists keep dissenting from each other, the union will cease to exist. The strength of the union lay in putting aside (voluntarily or otherwise) dissent and finding one voice to establish a coherent, functioning whole that could provide safety and security economically, militarily, and socially.

By exploring this popular anti-dissent slogan, we can see one of Randolph’s primary arguments against separation from Great Britain due to the high security risk to the colonies, and because he believed the colonies differed from one another too greatly to believe they could safely come together in unity. Randolph believed in the eventual independence of a united group of colonies, but in 1774 he feared it was too early and they would be at war with one another as soon as they separated from Great Britain. While he agreed with everyone that a new government would be required, he didn't believe a consensus would be possible. And he was nearly right; in the 1790s, the Alien and Sedition Acts were passed to clamp down on, among other things, dissent.[1]

[1] Terri Halperin, “The Alien and Sedition Acts of 1798” in Ben Franklin’s World: A Podcast about Early American History, hosted by Liz Covart and produced by the Omohundro Institute.