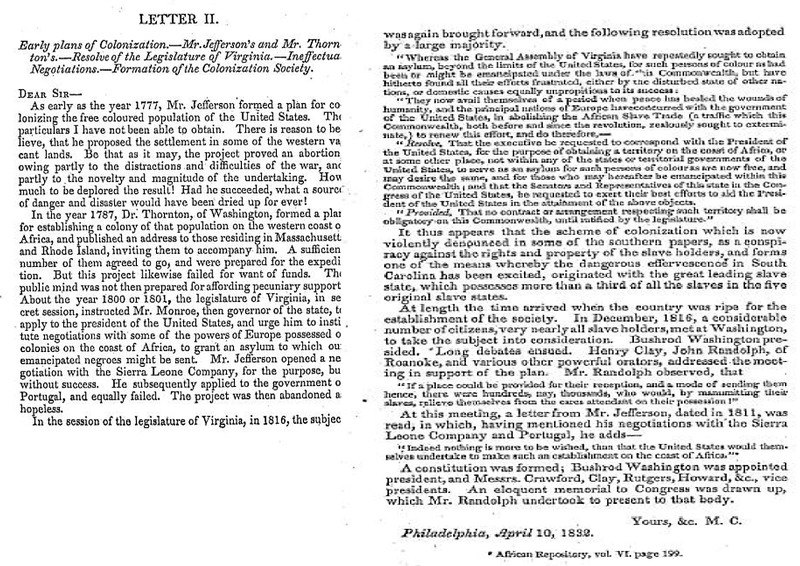 Notable members and affiliates of ACS included James Madison, Henry Clay, John Randolph, Bushrod Washington, Thomas Jefferson, William Lloyd Garrison, James Monroe, and several more who fought for the funding to send free blacks to Africa. Letters were written between Thomas Jefferson and James Monroe discussing the logistics of the society and what funding the society would do for the country. The picture above is a letter written by an ACS member to Thomas Jefferson proposing that Jefferson acquire land from European rule to begin the emigration process for African Americans. Jefferson wrote back and forth to Monroe, the governor of Virginia at the time, to finalize negotiations surrounding land acquisition and ACS founding for transportation to and from Liberia. The Virginia General Assembly appropriated funds to church leaders of Episcopalians, Baptists, Presbyterians, and Methodists where leading citizens like John Marshall and James Madison served as heads. [1]

Blank certificate of membership to the American Colonization Society

The most abundant motive present in abolitionist members of the ACS was that free blacks could never be acclimated into American society and therefore needed to form their own society elsewhere. In letters addressed to the ACS, members affirmed how truthful the society was at accessing the needs of all parties. ACS member Alexander T. McGrill begged to question during an address what freedom is if social degradation remains. [1] He, like other members, went on to say that only the ACS could yield prosperity for the African American population.

Slave owners and ACS members of a similar vein had their own motives for ACS membership. Their motives were rooted removal of free blacks from America. Thomas Jefferson Randolph offered a plan to remove slaves from Virginia proposing that all children of slave mothers born after July 1840 become warden of state until they earned enough money to pay for transportation to Liberia.[2] Randolph thought that the whitening of Virginia would increase land and property value for landowners. While expressing these beliefs, other ACS still hid behind their assumed motive of bettering the lives of African Americans so well that researchers more recently discovered the inherently racist nature of the society. African Americans could have been an integral part of American society with help from abolitionists that held the same vision. Instead, they were surrounded by the ACS, a society with many influencers and contributors all with ulterior motives, that dismissed chances of property for blacks in America.