The Sins of the Tavern 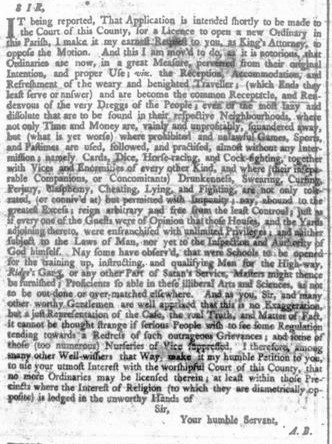 The printer of the Virginia Gazette reprinted a copy of a letter sent from a clergyman to a king’s attorney. In it, the clergyman opposes the opening of any new ordinaries in the county, complaining about cards, dice, horse-racing, cock-fighting, drunkenness, swearing, cursing, perjury, blasphemy, cheating, lying, and fighting in taverns. He implores the king’s attorney not to allow any more ordinaries in the “Interest of Religion.”

In many diary entries, one can find reviews of taverns that run from glowing praises of the services provided to disdainful laments about the poor sleeping conditions and food quality. Some taverns were well-kept, such as Raleigh Tavern and Wetherburn’s Tavern, and others were not, and these received the equivalent of a bad Yelp review in a traveler’s journal.

For example, a reader of the Virginia Gazette sent a letter to the printer, a copy of a letter sent from a clergyman to a King’s Attorney. In it, the clergyman opposes the opening of any new ordinaries in the county, complaining about cards, dice, horse-racing, cock-fighting, drunkenness, swearing, cursing, perjury, blasphemy, cheating, lying, and fighting in taverns. He implores the king’s attorney not to allow any more ordinaries in the “Interest of Religion.” [1] This passionate vilification of tavern activities and culture not only reveals the many activities which could take place at a tavern, but also the social understanding of what a tavern meant. The clergyman clearly feels that the “tavern” is meant to be a rest house for travelers, as he states that an ordinary’s “uses” have been “perverted” from their original purposes, to provide “refreshment” for a weary traveler. If a tavern is meant to be a symbol of hospitality, one which Americans took very seriously and provided as a demonstration of good will, wealth, and moral fortitude, then taverns in which illicit activities were occurring were then running in contrast to the function the colonists had intended. This clergyman’s letter bemoaning the various activities witnessed at a tavern reveals much of what could go on at “disreputable” taverns: gambling, animal fighting, drunken behavior, and public brawling. These activities are clearly offensive to this clergyman’s sensibilities.

But what did average colonial Americans think of drinking? In “Drinking in Colonial America: Rattle-Skull, Stonewall, Bogus, Blackstrap, Bombo, Mimbo, Whistle Belly, Syllabub, Sling, Toddy, and Flip” Ed Crews of the Colonial Williamsburg Foundation describes the various social events that corresponded with the consumption of various alcoholic beverages. “Christenings, weddings, funerals, trials, and election-day gatherings, where aspiring candidates tempted voters with free drinks” were all laden with alcohol consumption. [2] Alcohol itself was not considered sinful, but Puritan leaders did dislike “drunkenness.” “Excess” was frowned upon more than the simple act of drinking. So alcohol itself was not something to be purged from society, but the inability to control how much one drank and how it affected one's sensibilities was something shameful. Ed Crews argues that there was a stigma around being an “alcoholic,” since Americans did not see alcoholism as a medical condition, but rather a battle of “will,” which, when lost, could result in the dissolution of families and communities. Alcohol, and taverns as a closely related alcohol-serving public establishment, thus could be a vice which prevented one from controlling themselves economically (by spending too much money drinking) or socially (by embarrassing one's self publicly while intoxicated). [2]

Alcoholism was thus seen as a battle of "willpower" and moral fortitude rather than an actual disease. Someone who could control their drinking was respectable. Someone who couldn't was prone to sin and bad temper, and was to blame for their inability to stop. Alcohol, like taverns themselves, had strong positive and negative social and moral implications in early America. Like the tavern, it depended on individual factors. Someone predisposed to alcoholism would be more likely to "shame" himself, the same way poorer tavern keepers were limited in how elegant they could make their taverns with more limited means.