Wealthy Tavern Keepers as Part of the Elite 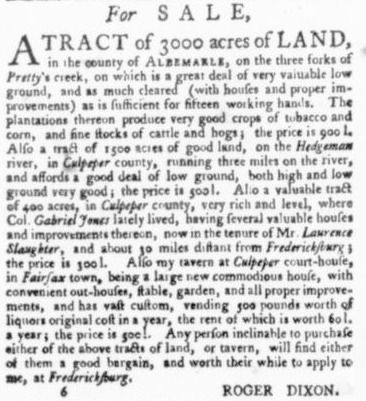 Roger Dixon put an ad in the Virginia Gazette advertising 3000 acres of land in Albemale, 1500 acres in Culpeper on the Hedgemann river, and his tavern in at Culpeper courthouse in Fairfax town.

Another reputable tavern was Wetherburn’s Tavern, located in Williamsburg, Virginia.

In the Virginia Gazette, in which many notices about tavern sales and activities were advertised, Wetherburn’s tavern announced it was having a ball. Balls at the tavern were apparently commonplace. Henry Wetherburn had originally been a keeper at Raleigh tavern, having married the widow of Raleigh tavern’s keeper. When it was bought out by another group of men, he moved across the street and opened his own tavern. Here, at Wetherburn’s, he hosted the Ohio Land Company, which included George Mason and George Washington, who would meet at the tavern to discuss land they were speculating in West Virginia. Wetherburn was determined to provide an elegant and reputable space for social gatherings. He boasted a high quality of service, beverages, food, and utensils such as fine china, silver, and glassware. [1]

In contrast to the clergyman’s letter to the king’s attorney, this recounting of how Wetherburn’s tavern was run indicates that taverns could be places of refined social tastes and moral acceptability.

Roger Dixon put an ad in the Virginia Gazette advertising 3000 acres of land in Albemale, 1500 acres in Culpeper on the Hedgemann river, and his tavern at Culpeper courthouse in Fairfax town. He describes it as large and commodious, “with convenient out-houses, stable, garden, and all proper improvements.” He claims it vends “500 pounds worth of liquors original cost in a year” and that “any person inclinable to purchase either of the above tracts of land, or tavern” will find “them a good bargain.” He prices his tavern at 500£, and the year’s rent as worth 60£. This ad indicates what a tavern might sell for in the 1760s, and what would constitute as a “worthy” rent and profit for a tavern. He also mentions outhouses, a stable, a garden, and improvements made to the structure. [2]

Clearly, a tavern worth buying must be on good, spacious land which horses could graze on, and their owners could comfortably live on while traveling.

Additionally, taverns run by the less wealthy were more likely to be seen as run down, having poor service, and attracting seedier clientele with lower costs. If a tavern keeper could afford large tracts of land, quality food, quality service, and quality silverware, then they would attract "quality people" of high breeding.