The Important Location of the George Mason Memorial

The precise location of the Memorial is as important as the design itself. In an e-mail interview with the designer, Wendy M. Ross, Ross acknowledged that “setting is always critical to my public art, whether it is representational or abstract.” In this realistic memorial, Mason is literally seated near some of his closest colleagues, whether or not they were his dearest colleagues by the end of his career. His opposition to the Declaration of Independence led to severed ties between Mason and his peers Jefferson and Washington, although the three were considered close before the disagreements. That is why it is so interesting that Mason is positioned so his view out into the National Mall peers at Jefferson and the Washington Monument. Later in the e-mail, Ross writes: “For the Mall…the setting was the seat of government and the monuments to Washington, Jefferson, Lincoln, Roosevelt and others. The Republic itself was the setting…” Not only was he peering out at the other statues and monuments, but at the Capitol Building itself. In the annotated picture, you can see the George Mason Memorial (southwest corner) and how near it is to the Jefferson Memorial. Furthermore, the Washington Memorial would be clearly in sight and the Capitol building not far to the east. One last fact that makes the placement so interesting is the south-bound bridge directly behind the memorial is in fact the George Mason Memorial Bridge. So, in order to leave Capitol Hill and the National Mall, one must use the George Mason Memorial Bridge, bearing an interesting resemblance to Mason turning his back on the Declaration. 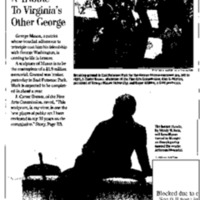