In the Virginia Gazette, an advertisement stated “Wanted, a person capable of managing a Tavern…” shows that the advertisement was not directed towards a man. Just below this advertisement is one that states, “Wanted, an industrious, sober, single Man…” This comparison in one section of the newspaper showcases how a woman could apply for this position as well. This image is from the Virginia Gazette from May 7th, 1772 which is currently held by Colonial Williamsburg. 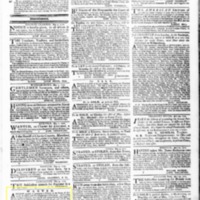