Roles and Reputations of Women

For most of the 18thand 19thcentury, women’s role in society were domestic and feminine. This was a result of, “the men’s world was tumultuous, corrupt, and corrupting [and] in contrast, the domestic realm was to be a safe-haven, a refuge, from the immortality and disorder beyond the household walls.”[1]This provides an explanation for the gender roles during this time. In addition, the depiction and imagery of women outside the domestic sphere are masculine, vulgar, and repulsive. These two images from the Mariner’s Museum highlight the illustration of female tavern keepers from a male perspective. Female tavern keepers and tavern goers were given a negative illustration. According to historian Peter Thompson and Roberts A. Campbell, “respectable women rarely went into taverns, and slaves, apprentices, and Indians were banned by law.”[2]

Historian Suzanne Lebsock, professor of Rutgers University and author of The Free Women of Petersburg, examines the validity to these male perspectives. Grocery stores and taverns had some parallels such as the reputations of the women who ran them. As for an example of a women grocery owner, “Nelly Butler, was convicted in 1857 of selling liquor without a license, and threatened one of the witnesses against her.”[3]Another woman named, Mary Downing “observed two men taking beer mugs from her store, she followed them out, “tumbled both in the gutter and recovered her property.”[4]Both of these scenarios showcase women acting violent and aggressive towards their customers. 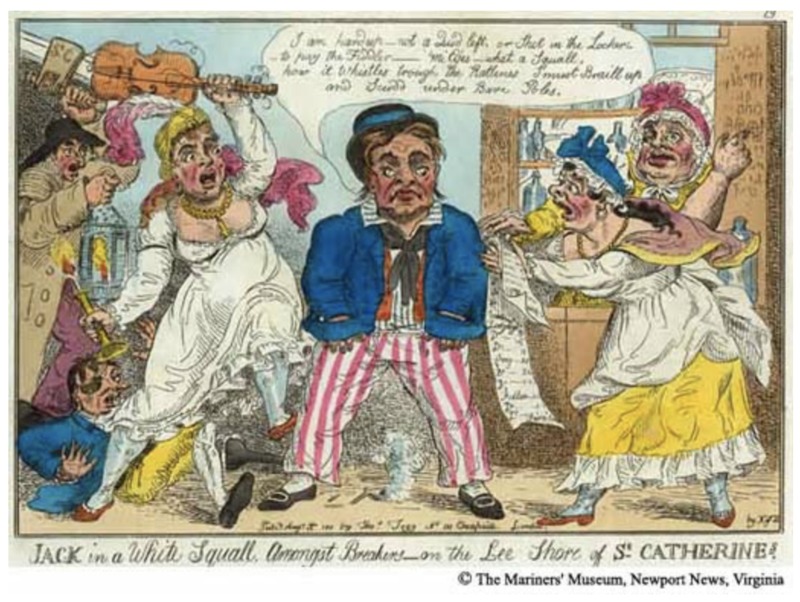 Nancy L. Struna explored similar reputations of female tavernkeepers and goers. Most of the violence from women would also be towards women. For instance, Elizabeth Kelly ran a tavern in Annapolis, Maryland in 1747. Isabella Arena was a drunken customer who, “swung at the owner, and Kelly apparently returned the favor.”[5]This record of this incident can be found in the Anne Arundel County Court Judgement Records of 1734-1775. Research such as this, reinforces the stereotypical images of female tavern keepers.

Contrary to the violent and vulgar depiction of females in taverns, Struna also explores the abuse women endured from men. She states that, “commonly women were the objects of attacks, abuse, and other aggressive acts” and “some of them were barmaids and keepers whom male customers verbally upbraided for not delivering the drink or the meal quickly enough.”[6]The topic of abuses and violence around female tavernkeepers currently lacks research and primary sources. However, the history or alcohol and drinking correlates with domestic abuse and violence. Violence and alcohol closely relate. In the book Drinking in America, Susan Cheever, a cultural historian, explores the importance of alcohol throughout American history. Cheever used is an array of books and articles to explain how, “alcohol is closely associated with rage.”[7]

[3]Suzanne Lebsock. The Free Women of Petersburg: Status and Culture in a Southern

[4]Suzanne Lebsock. The Free Women of Petersburg: Status and Culture in a Southern