Taverns in the Public Eye 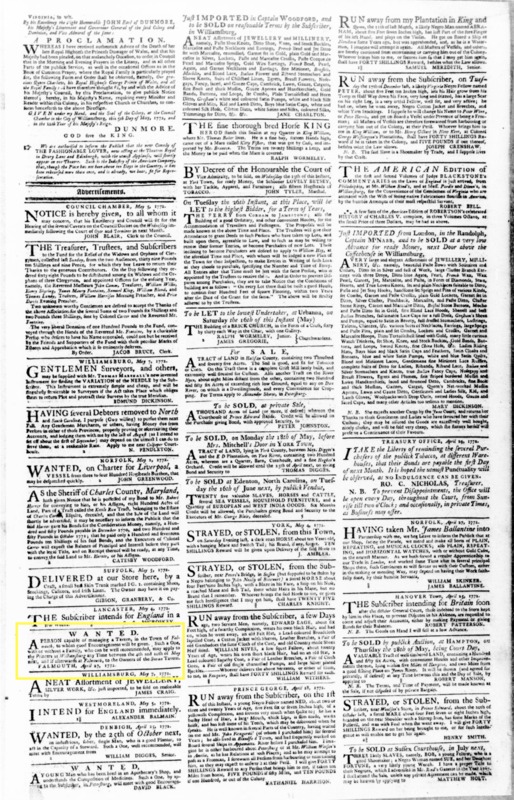 An advertisement in the Virginia Gazette for a tavern keeper on May 7th, 1772.

The Virginia Gazette and other local newspapers provide details to the specifics in small towns. For instance,an advertisement stated “Wanted, a person capable of managing a Tavern…” in the Virginia Gazette, shows that the advertisement was not directed towards a man. Just below this advertisement is one that states, “Wanted, an industrious, sober, single Man…” This comparison in one section of the newspaper showcases the possibility woman could apply for this position as well. Advertisements and complaints in local newspapers are beneficial to the understanding of taverns role in society.

In 1958, Francis M. Manges wrote her dissertation called, “Women shopkeepers, Tavernkeepers, and Artisans in Colonial Philadelphia.” This article displays the details of businesswomen in Philadelphia through an analysis of local newspapers. The strengths of her article include documentation of the earliest known female tavern owners. According to her research, “on November 16th, 1685, Mary Idchfield and Alice Guest gave security of 20 pounds each for keeping good order in their ordinaries.”[1]However, Manges 1958 article is outdated and her credentials are unknown. Despite these weaknesses, her work is cited in most of the literature relating to this topic. She used to her advantages the resources in Philadelphia since she wrote this while attending University of Pennsylvania. This helps showcase local archives and specifics on women tavernkeepers.

Similarly, to Manges research in Philadelphia, Suzanne Lebsock used newspapers in Petersburg, Virginia to explore working women. At the end of her book, The Free Women of Petersburg; Status and Culture in a Southern Town, 1784-1860,she acknowledges all the newspapers she explored. A few of the newspapers were: American Constellation, Daily Courier, Farmers’ Journal, Morning Advertiser, Republican, Virginia Star and Petersburg Advertiser.[2]

[2]Suzanne Lebsock. The Free Women of Petersburg: Status and Culture in a Southern