The Masons and the Mexican-American war 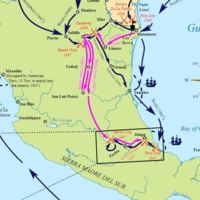 When one thinks about the impacts of the Mason family, typically Texas is not the first item to come to one's mind. However suprisingly enough, the Mason family did have a significant impact on Texas in the Mexican-American war.

Contextually speaking, the Mexican-American war was not one of the lighter sides of American military history. No, this is one of the stains that America has to wear. Many historians and past presidents have reffered to the forceful taking of land as very aggressive and in no way defendable. With this knowledge, it makes the war a very important one to study and look at its impacts

Three members of the Mason family made their way to Mexico to fight in the war: Lieutenant George Thomson Mason, Captain Stevens Thomson Mason, and Richard Barnes Mason.