Public exchange of grievances between Armistead Mason and John McCarty.

We are requested to state that Gen. Mason's letter to Dr. Tebbs, published in Mr. John M’Carty’s McCarty handbill of Friday evening, was produced by a threat from Mr. M’Carty to challenge Mr. George M. Chichester or Gen. Mason if either of them had lent pistols to Wm. H. Handy: That General Mason never did refuse directly or indirectly to accept a challenge from Mr. John M'Carty; but on the contrary, he distinctly and repeatedly told Mr. Dulany, the bearer of Mr. M'Carty's challenge, that he would resign his commission, accept a challenge and fight him; but that he would not permit Mr. M'Carty to prescribe the terms of the duel, which he, being the challenger, had no right to do; That Gen. Mason afterwards agreed to wave all exception to the form of Mr. M'Carty's challenge, and fight him on terms which Mr. M'Carty & every other person should acknowledge were, in every possible respect, perfectly equal, and desperate to the last degree, and that Mr. M'Carty rejected this proposition; That Gen. Mason then agreed to meet Mr. M'Carty on his own terms and finally to become the challenger if he could be assured that Mr. M'Carty would fight. But all in vain Mr. M'Carty would not fight on any terms. And yet he has published Gen. Mason as a coward! Can such a man have any sense of honor or even ?? Let the public judge. The above facts make out a pretty strong case, and if established, as we are assured they will be by the most indubitable testimony, we humbly conceive that we shall hear no more of the heroism of Mr. M'Carty--no, no even from the most bitter and virulent of Gen. Mason's enemies. More hand-bill agitation--In consequence of a short statement of facts which we made as above, on Saturday with respect to the renewed controversy between gen. Mason & Mr. M'Carty, the Washingtonians have been in a complete uproar--even Sunday shone no Sabbath day to them. About noon on Sunday the "greet mon" arrived big with wonderous ideas, and, after much labour and some friend-ly assistance, brought forth another "To the Public." -- Some wags insinuate that it is an abortion. However, the Washingtonian office sweat on Sunday evening in stamping it with type authority. The whole stamina of this premature effusion is that general Mason did not agree to fight Mr. M'Carty, because forsooth Mr. M’Carty shut his eyes and stopped his ears when the proposition was made, therefore gen. Mason is disgraced. We are still assured, the Sunday-night-hand-bill to the contrary notwithstanding, that the facts stated by us on Saturday will be established on the most indubitable authority. But we should be truly happy to have this unpleasant, protracted and tedious dispute terminated thus harmlessly.--Much ink has been shed on the subject but no blood, and we heartily wish there may be none. If Mr. M'Carty has been caught in a fib, blood cannot wash it away—if he is a mam of truth and integrity, blood is not necessary to establish it. Time and a strict adherence to those principles will raise him to the standard of a man and a gentleman. The insinuation of Mr. M’Carty that the Genius of Liberty is under General Mason’s immediate patronage or control is mean and utterly false. 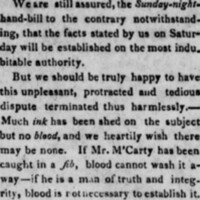