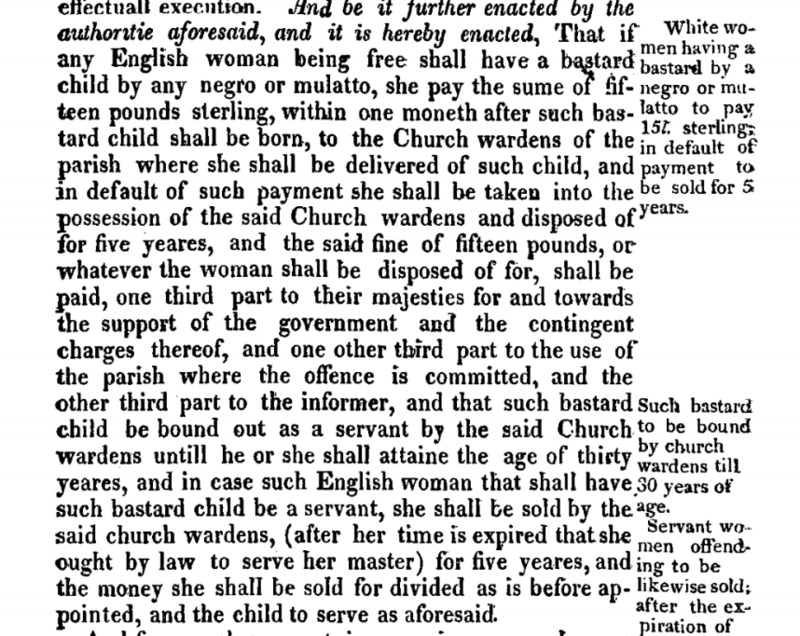 This is a legal document showing the punishment for a white women having a bastard by a negro man and what happens to both parties.

Both enslaved and free black men suffered similar punishments. If it could be proven that a black man was guilty of bastardy, the punishment depended on who the mother of the child was. If a white women accused a black man of this crime, he could be beaten whether or not he was guilty. The child could end up several places, but most likely would be taken away and made a servant for a certain number of years as seen above. If a free black man has a child with a white women he can be sentenced to seven years of labor.[1] However, most of the cases concerning the relationship between a black man and white women did not lead to bastardy. Mumford cites a few cases that demonstrate other prejudice shown to black men. “In Elizabeth City County, a slave was tried in 1742 for the rape of a white woman, was not found guilty, but was beaten with 39 lashes for assault. In 1702 in Henrico County, a Negro was executed for rape. A free Negro in ‘Isle of Wight County was pilloried and whipped for attempted rape; and he was pelted in public.’”[2] Black men were not typically given the chance to plea for bastardy, because if a black man was accused of fornication with a white woman he was almost immediately reprimanded in some form or fashion. This is a sentiment that has been seen throughout history and is still seen today.