Effectiveness of the Robinson Professors Program 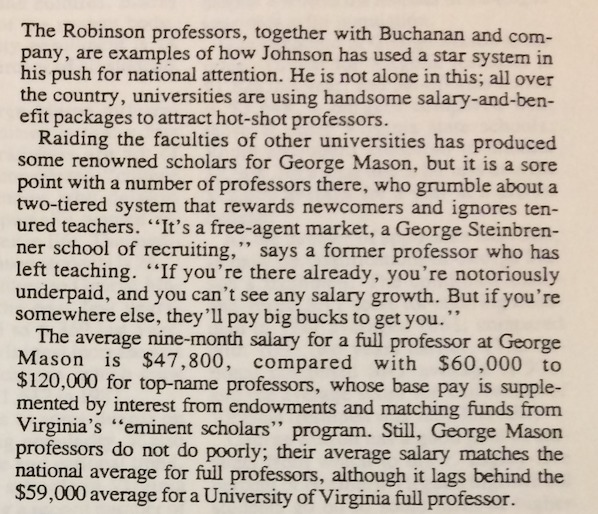 An excerpt from a 1988 article by Diane Granat in The Washingtonian titled, "Growing Up Fast." This excerpt highlights the unhappiness of some existing faculty regarding the Robinson Professors program. 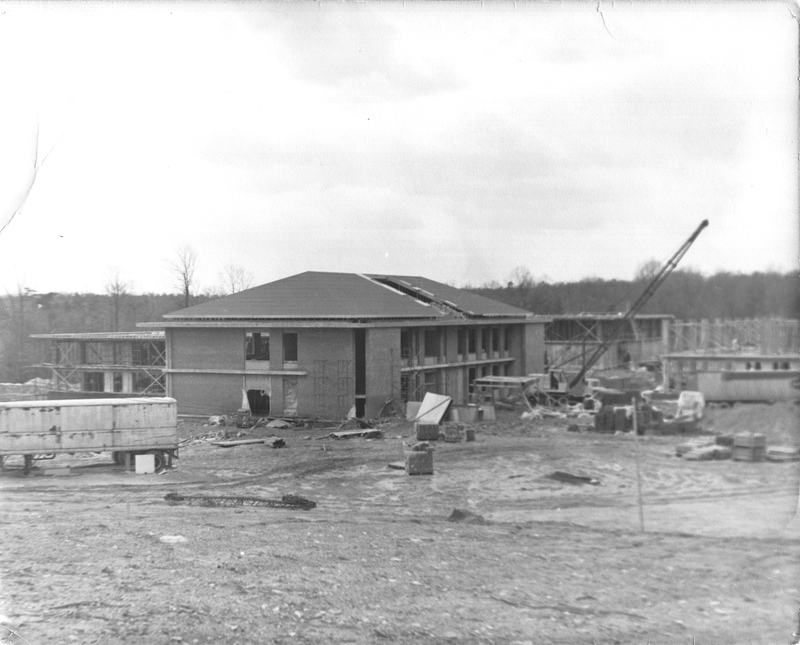 As President Johnson had hoped, the Robinson Professors program soon attracted eminent scholars from a variety of backgrounds to the university. They included civil rights leader and Pulitzer Prize-winning journalist Roger Wilkins, geologist and musician Robert Hazen, and scholar and playwright Paul D’Andrea.1 The Robinson Professors were expected not only to be committed to undergraduate teaching, but were also expected to serve as innovative leaders who would increase the university’s scholarly standards. As established, distinguished scholars coming into a young, underdeveloped university, the Robinson Professors were also to serve as faculty role models– acting as scholarly and educational exemplars that would give junior faculty opportunities to advance their careers.2

While the Robinson Professors program was indeed successful in attracting notable scholars to the university, a handful of university members believed that the program led to the undervaluing of existing faculty. They highlighted the significant income disparity between average faculty members and the well-payed Robinson Professors.3 In a 1993 study, Pfeffer and Langton studied the adverse effects of income inequality within colleges and universities. Through analyzing a survey of faculty members from over 300 colleges and universities, they find that educational institutions with a high degree of income inequality often experience a low amount of job satisfaction, research collaboration, and productivity among faculty members.4 Given the significant differences in income between the Robinson Professors and the average faculty member, it is possible that the program may have had these types of negative effects on faculty members within the university– which, if true, would run contrary of the program’s intention to increase the institution’s research standards.

However, other studies have shown that the presence of faculty role models can have positive effects on a university’s development. A 2014 study on the effects of mentorship on young professors identifies several key benefits that can come from programs that allow for faculty leadership and guidance. Among the benefits that the study identified were a strong ability to secure research funds, frequent presentation of research to the public, high scholarly performance, and high job satisfaction among faculty members who received mentorship– qualities that a young university such as George Mason certainly would have sought.5 In addition, having distinguished scholars teaching undergraduate courses can lead to an increased desire to learn and a heightened sense of curiosity among undergraduate students, which would serve to further the university’s educational quality.6 However, another study finds that it is important for the planners of faculty leadership programs to be actively involved in the mentoring process through mentor training and evaluations in order for such programs to reach their full potential.7 It is not clear whether this occurred for the Robinson Professors program, especially considering the high degree of autonomy these professors were promised in their recruitment to the university.

[7] Lisa Ehrich, Brian Hansford, and Lee Tennent. “Formal Mentoring Programs in Education and Other Professions: A Review of the Literature.” Educational Administration Quarterly 40, no. 4 (October 2004): 518–540.