George Mason I: Harassment and Rebellion 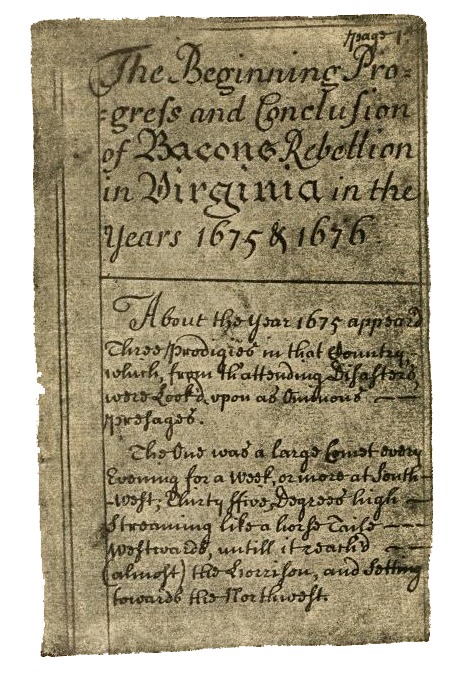 Thomas Mathew's "The Beginning, Progress and Conclusion of Bacon's Rebellion" is a first hand account to the conflict, and George Mason's involvement.

When George Mason I arrived to the colony in 1652 he became part of a colonial system that was systematically stripping local Indians of their land. Pamela Copeland writes, “When Mason began to cast about for land, the whole stretch of the Potomac lay vacant, or nearly so.”[1] but it had not always been this way.

Before Mason’s arrival, a series of conflicts led to a harsh peace treaty in 1646 in which the Powhatan became tributary to the English. They ceded “all the lands between the falls of James and York rivers downwards to Kequotan.”[2] and were barred from entering on pain of death. In an extremely short amount of time, settlers were given free reign to all northern lands, with no consultation of Necotowance or other Indians and no move to repeal the previous act.[3] On top of requiring subjugation, the treaty opened up new opportunities for the Indian slave trade, which had already been mounting.[4] Berkeley, the governor of Colonel Mason’s time, softened the colony’s Indian policy but showed no love for his native neighbors. He avoided genocidal war only because it was “too difficult, too expensive, and...too risky”[5]

In 1662, George Mason I had been settled in the colony for ten years when he was brought before the assembly along with captain Giles Brent, Colonel Gerrard Fowke, and Mr. John Lord to be disciplined for wrongs against Wahanganoche, chief of the Patawomeck, a fringe tribe of the Powhatan.[6] Giles Brent was charged for bringing accusations of murder against the chief, and all four men were ordered to pay reparations, Mason’s part being one hundred arms lengths of roanoke (white beads used as currency by the Indians). Fowke and Brent were barred from bearing civil or military office, yet they continued to hold public offices. John Lord and George Mason were ordered to pay the public two thousand pounds of tobacco or be suspended from civil and military power.[7] It is unknown whether these requirements were ever met. Edmund Morgan writes that these, “big men had always taken the lead in harassing the Indians.” With his power and position, George Mason I wielded his influence against American Indians.

Mason was soon involved in another incident with a local tribe that would have far longer-reaching consequences. In 1675, members of the Doeg stole Thomas Mathew’s hogs, after he failed to pay for goods he bought from them.[8] Mathew responded by killing several Indians, who in turn killed one of Mathew’s servants. Mason and Giles Brent pursued the Doeg. During one attack, the English captured the eight-year-old son of the chief of the Doeg and brought the boy to Mason’s home where, unconscious, he was baptised into the Church of England.”[9] Eventually regaining consciousness, he was returned to his tribe. Others caught in the attack didn’t fare as well. Mason’s men surrounded a cabin and its sleeping occupants, and shot and killed fourteen Susquehanna before discovering that he had the wrong Indians.[10] Thomas Mathew records in his early account that upon being told by a Susquehanna who he was shooting, Mason ran among his men shouting, “For the Lord’s sake, Shoot no more, these are our friends the Susquehanoghs.”[11] However, the damage was already done. Mason’s actions pulled the Susquehanna into a violent cycle that would become Bacon’s Rebellion.

Colonists were gripped by fear of the Indians. Berkeley’s refusal to gratify the bloodlust of the people resulted in Nathaniel Bacon’s insurrection against the law to fight the Indian “threat” against which he and his followers waged war without discretion.[12] When approached by Thomas Mathew for advice, George Mason said that, “If the govern’r would give his own commission he would be content to serve under generall Bacon.”[13] This not being the case, Mason watched the rest of the rebellion from the sidelines. Before the end of the war, Berkeley ordered the persecution of the Doeg and Potomack “to their utter destruction”.”[14] In 1676 Indian slavery was essentially legalized in a law allowing all prisoners of war to be kept for life.[15] While the 1677 Treaty of Middle Plantation that ended the war outlawed Indian slavery, many Virginians ignored the precepts of the treaty much like George Mason had disregarded laws against harassment and unlawful detainment. By the time the treaty was signed, Virginia Indians had been even further subjugated and dehumanized in action and law.