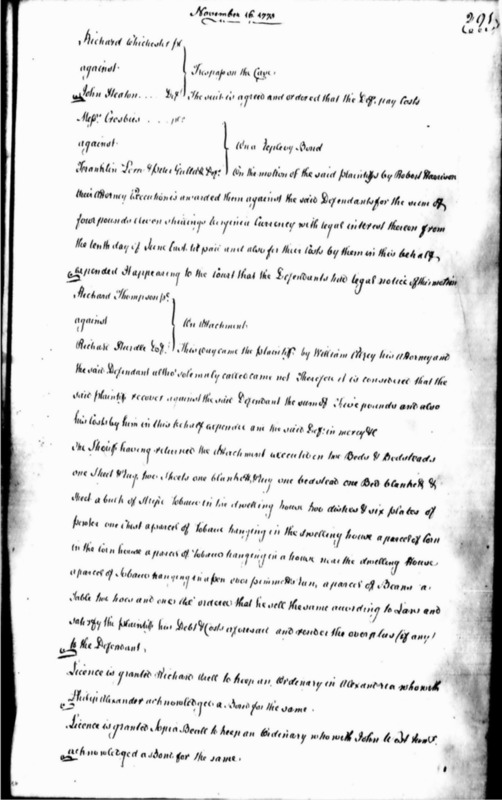 Image of the Fairfax County Court Minute Book of 1772-1773 showing a "License is granted Sopia Beall to keep an Ordinary who with John West acknowledged a bond for the same."

Taverns are important to the function of a city and society. They “provided meals, good company, shelter, warmth, and local news that was sometimes read aloud in the tavern from a jointly newspaper, and sometimes sponsored lectures and were the preferred spot for political discussions and campaign speeches.”[1]Many taverns were located near a Court House therefore, it was an accessible area for political conversation. Sharon V. Salinger, history professor wrote, Taverns and Drinking in Early America, which uses resources that extend from diaries and letters to small ads in local newspapers. Salinger’s analysis of sources, both primary and secondary, explores the way post Revolution taverns and hotels became elitist and, “manifested an American society that maintains segregation in public by race, gender, and class.”[2]

As for Fairfax in the 18thcentury, a woman named Sopia Beall received her liquor license, “to keep an Ordinary” in November 16th, 1773. This is shown in the image of the Fairfax Court Minutes from 1772-1773. In order to obtain a liqiour license was an important tool is maintaining a popular and legal tavern. Historians researching this topic mainly rely on, “measure of women’s participating in retailing comes from lists of licenses, lists that were kept sporadically.”[3]

The research of female tavern owners in the Southern parts of the American colonies lacks primary sources and attention. “Due Attention Has Been Paid to All Rules: Women, Tavern Licenses, and Social Regulation in Montreal, 1840-1860”, is an article written by Mary Anne Poutanen, member of Montreal History Group and professor at Concordia University. This article is an analytical document that explains how 90 females maintained their taverns and license. Poutanen’s argument is that women owning and running a tavern gave them a heightened respect in society and economic stability. Poutanen began with the use of liquor licenses to create a research paper that evaluated the tax rolls to find the names of the women. Then the names were crossed with birth and death certificates, marriage licenses, name change documents, and local newspapers. Poutanen found a new way to create a narrative with the data and facts through extensive research of primary sources. Although, this is from a post Revolution period in Canada it still relates to the attitudes towards working women and highlights the missing elements in early United States research.

[3]Suzanne Lebsock. The Free Women of Petersburg: Status and Culture in a Southern