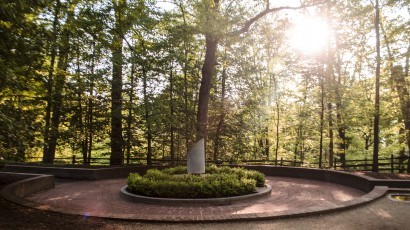 The memorial constructed in 1983 to remember the enslaved people of Mount Vernon.

This memorial is a clear departure from previous monuments to George Washington. In addition to actually acknowledging Washington's relationship with slavery, the memorial is commemorated each year and is widely advertised by Mount Vernon. The memorial is also intentional with its design and cannot be easily ignored. A short gray column stands in the middle of the area and represents "life unfinished." In addition, there are three steps leading up to the column inscribed "faith," "hope," and "love." This is not simply a marker like the previous monument but was thoughtfully designed, much like previous monuments to George Washington.

Despite this progress, Mount Vernon certainly has a shaky legacy of remembering the enslaved people who lived and worked there. Mount Vernon allowed the original slave memorial to be overgrown and the memorial was not included in the official handbook of the estate which was sold to tens of thousands of visitors. In addition, three residential spaces for enslaved people were converted into modern usages instead of being restored. While Mount Vernon has made strides in acknowledging the people Washington has owned, they have certainly struggled in telling the entire legacy of George Washington and in acknolwedging his status as a slave owner.

The memorial to enslaved people demonstrates the ability to remember and honor Washington while recognizing his status as a slaveowner. Memorials have the power to tell certain narratives of history, whether they be good or bad. In memorials to George Washington, he is generally portrayed as heroic and god-like while the narratives of the enslaved people he owned are forgotten. Monuments are a key way of presenting these narratives, particularly in the modern era, therefore it is of utmost importance that the entire story is being told when constructing these monuments. When remembering Washington we must challenge the traditional narratives surrounding him and consider who these monuments have forgotten and ignored.