The Original Memorial to Enslaved People at Mount Vernon 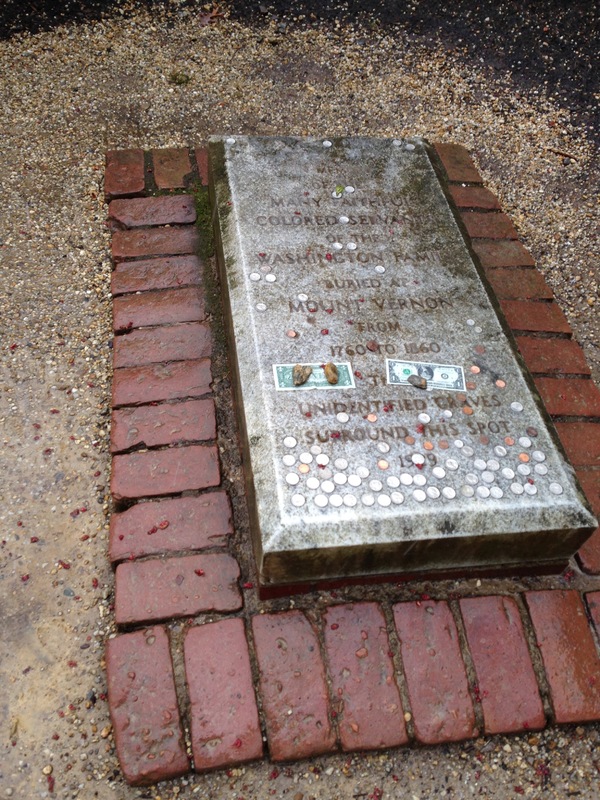 The orginal marker of the cemetary of enslaved people at Mount Vernon. It reads "In memory of the many faithful colored servants of the Washington family buried at Mount Vernon from 1760 to 1860. Their unidentified graves surround this spot. 1929"

In each monument constructed during this time period, Washington’s status as a slaveholder is ignored and only an entirely positive legacy is constructed of him. Throughout the 18th and 19th centuries, Washington was memorialized as a hero, god, and father of a country. When looking at the grandiose monuments in Virginia and New York dedicated to Washington, it is easy to forget the parts of his life that we don't like to talk about, namely his status as a slave owner.

This marker was constructed in 1929 by the Mount Vernon Ladies Association to mark the nearby cemetary of enslaved people from Mount Vernon. Despite this, the marker was ignored and became overgrown until it was rediscovered in the 1980’s. There was even controversy over whether the marker should have been constructed at all as it served as a reminder of slavery that ”recalled far too much misery and suffering.” This marker was a preliminary step in acknowledging Washington’s relationship with slavery but it took several decades for the issue to be discussed again.

It is interesting to note the money placed at this marker. Although there is now another, much bigger, memorial next to the marker, people have placed money on the marker. More specifically, pennies, quarters, and dollar bills have been left. This small act demonstrates the power and importance of monuments. Even though this marker has been overshadowed by another memorial and was forgotten about for decades, people still use it as a way to remember the enslaved people of Washington and honor their memory through the money they place on the marker.