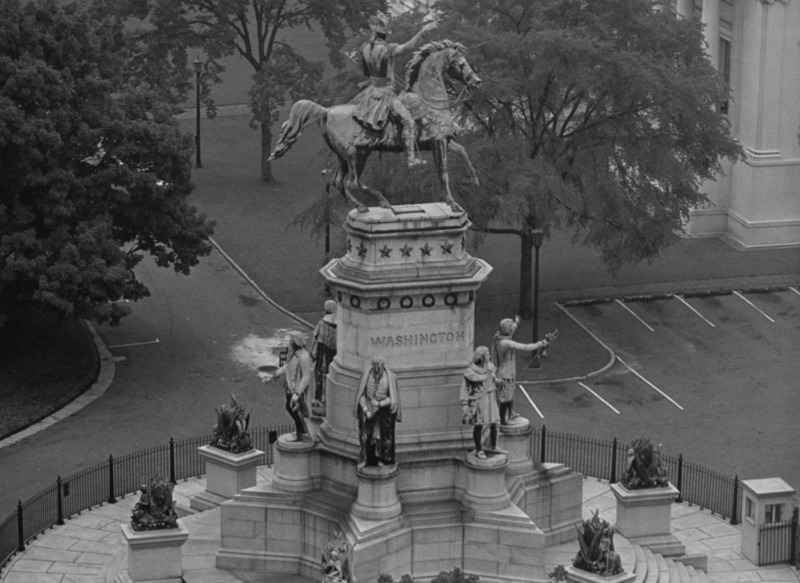 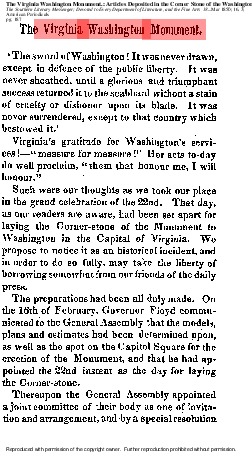 The Virginia Washington Monument in Richmond is composed of George Washington himself as well as six Virginians who played a part in the revolutionary era. The construction of monuments to Washington in other states motivated Virginia to create its own monument. As Saunders (1975) states that “News of other cities’ planned Washington memorial monuments had quickend the society’s desire to get Virginia’s monument project underway” (p. 6). States were essentially competing to create the best possible monument to George Washington. As a result, controversy over which design to use for the monument was rampant.

Both monuments also demonstrate the glorification and mania surrounding Washington. As the newspaper article (pictured above) describing the laying of the cornerstone of the monument demonstrates, Washington was hailed as a hero. The newspaper states while describing Washington "The sword of Washington! It was never drawn except in defence of public liberty. It was never sheathed, until a glorious and triumphant success returned it to the scabbered without a stain of cruelty or dishonor upon its blade." In addition, the laying of the cornerstone is described in the newspaper as a ’historical incident’ and details the many people in attendance, including the president of the United States. As this newspaper demonstrates, Washington was glorified and in the eyes of the people, could do no wrong. The Virginia Washington Monument was a reflection of this belief and portrays the supposed heroism of Washington in addition to Virginian pride.