A CONSIDERATION OF RELIGION, TRADITION, AND THE ETHICS OF THE MEDICAL PRACTICE 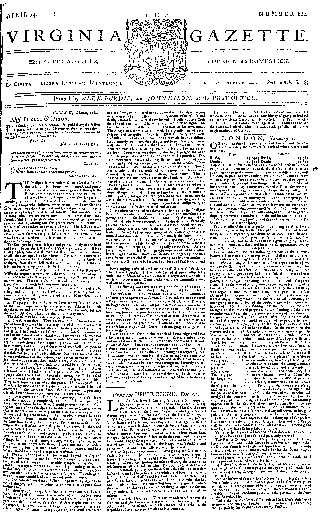 The first page of Purdie and Dixon's April 14th, 1768 issue of the Virginia Gazette. This contains Dr. John Dalgleish's article on his previous successes with inoculation.

Religion was a contributing factor to the conflicts in Boston and Charleston. However, religion was treated differently in each. In Boston, there was a surprising split of opinion with religion – many ministers sided with Mather and Boylston on inoculation. Mather himself believed that inoculation was his Christian duty to inoculate others, and thought that the Devil himself had taken over the people who were against inoculation. Ministers believed that it was God’s blessing to have the operation done. However, Dr. William Douglass and the anti-inoculationists called out the ministers who sided with Mather, saying that they were choosing several men over God. They also believed that bringing sickness upon oneself went against God’s will, and inoculation was an act of rebellion against God.1

In Charleston, Providentialists had religious objections to inoculation. One of these objections was that they believed, like those in Boston, that God brought diseases to man as punishment. They believed that there were other methods to treating smallpox that did not challenge God’s will – mostly herbal antidotes that colonists were already familiar with. For his part, Kilpatrick did not try to deny these views, but instead tried to incorporate them with his own by arguing that God gave man reason and free will, and that inoculating is an act of free will.2

Traditionally, patients who contracted smallpox were quarantined until they either died or managed to get better. The idea of pre-emptively exposing people to a weakened version of the virus to protect them went against this tradition of isolation. In Charleston in 1738, this was another argument brought up by the anti-inoculationists.2

Traditional treatment methods and religion were not major factors in the conflicts seen in Norfolk. That is not to say that they were present in the conflicts, they just weren’t the focus.

All three cities saw some form of a medical argument in the inoculation conflicts. However, the difference between Norfolk and both Boston and Charleston was that in Boston and Charleston, both sides were making medical arguments, while only one side was making major medical arguments in Norfolk. In Boston, the major medical argument against inoculation was that inoculation could bring potential harm to other healthy citizens. They mentioned that inoculation endangers the patients, and the way that Boylston inoculated patients spread the epidemic.1 In Charleston, the arguments came from two different perspectives. One was quantification of data about inoculation-related deaths. Kilpatrick used quantification of British data as a means of estimation of the ratio of deaths with and without inoculation. Dale and others against inoculation questioned the accuracy of Kilpatrick’s data, especially when applied on a local level. The other perspective revolved around the heavy reliance on the physician. Climate played a role in the severity of smallpox infections and the likelihood of being infected. Anti-inoculationists argued that physicians had to assess climate, severity of the outbreak, mobility of the residents, and whether all these factors indicated that an epidemic was inevitable. This level on uncertainty placed the physicians in an ethically gray area.2

In Norfolk, only the pro-inoculationists focused on the medical argument. As mentioned, Dalgleish used his past experiences in this April 1768 article to demonstrate the success and safety of inoculation.3 Anti-inoculationists, while making the claims of spreading smallpox with inoculation, made no move to challenge the efficacy and ethics of the practice.

← THE INVOLVEMENT OF NEWSPAPERS IN THE INOCULATION CONTROVERSY
LEADERSHIP IN THE RIOTS →
A CONSIDERATION OF RELIGION, TRADITION, AND THE ETHICS OF THE MEDICAL PRACTICE