JAMES PARKER AND THE SCOTTISH STRUGGLE 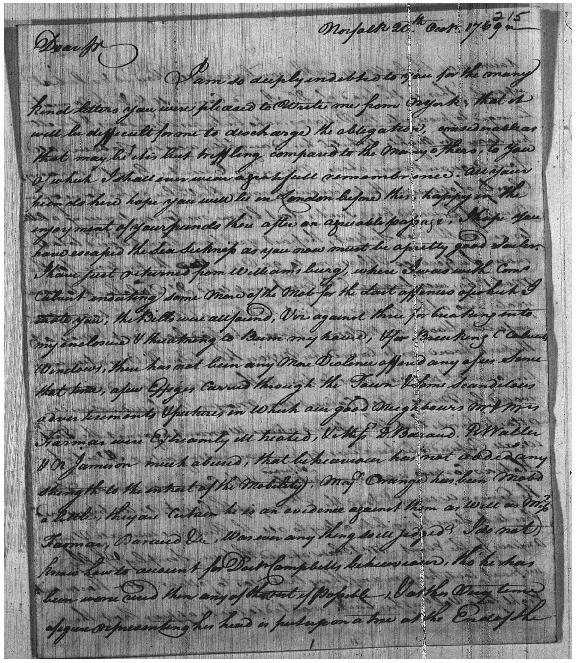 A letter written to Charles Steuart from James Parker on October 20th, 1769. In it, Parker mentions his feelings about the judge in Norfolk being biased against him due to him being Scottish.

As pointed out by Henderson, along with other historians who focus on the Norfolk riots, majority of those who were pro-inoculation were either Scottish or loyal to the Crown. Patrick Henderson labels them all as Loyalists and claimed that riots had a huge basis in the rising Patriot versus Loyalist tensions. However, one key aspect of the riots that Henderson neglected was the Scottish perspective. One of the best-cited Scots from Norfolk during the riots was James Parker, a Scottish merchant. It should be noted that Parker, while being a Scottish immigrant and eventually labeling himself as a Loyalist, showed sympathy toward the colonists before the riots – he even supported them in their acts against the Stamp Act. During the riots, it was cited that he did not consider himself a loyalist – the term was not used during the late 1760s.1 Parker and his wife Margaret had written letters to Charles Steuart over the course of the riots and the court cases. In them, Parker cites his growing sense of separation from the colonists and the reawakening of his Scottish identity. By May 1769, it became clear to Parker that the big issue in Norfolk related more to his – and his friends’ – Scottish roots, not the issue of inoculation2. By October of 1769, Parker had written that he felt that the courts were biased against him and Dalgleish. He specifically said that:

“There was a fixed resolution in the Judge to oppress us.”3

It was apparent in Parker’s writings that the conflicts were driven by dislike of the Scottish community as a whole. It is important to note the possible motivations behind this as well. In Colonial America, many Scottish immigrants were merchants. Parker himself had noted that there was growing unrest over financial obligations to the Scottish merchants – this could have very well been a motivating factor behind the violence and bias in Norfolk. The fact that Parker had been fined for engaging in inoculation during a time when inoculation was not illegal supports this.1

Another piece of evidence for the clear dislike of the Scots is a man named Samuel Boush. Boush was an anti-inoculationist during 1768.4 However, he eventually warmed up to the idea of inoculation as a preventative measure against smallpox. However, instead of going to Campbell and Dalgleish, he took his wife and children to someone in Maryland.5 Now, there are no records from Boush that explains his decision to inoculate in Maryland. But, understanding the mindset of the colonists in Norfolk and the influence of men like Joseph Calvert, it is easy to hypothesize that Boush chose not to inoculate in a town where the only physicians who inoculated were Scottish.

To summarize, the Scottish in Norfolk faced heavy amounts of prejudice during the riots and the court cases that followed. While the argument that patriotism fueled the anti-inoculationists to act out, considering that the Scots were also merchants to whom many Colonists were indebted to shifts the frame of reference from patriotism to prejudice and hatred.